Augmenting Reality with your Pet Needs in Mind

Sparkle Kitty AR is an ongoing year-long project in which I am the Lead UX Designer. As lead designer, I am in charge of creating the design of user interactions, narrative storyboard, and level plan.

Sparkle Kitty AR (tentative name) can be described as a combination of Neko Atsume and PokemonGo, in which you have the ability to interact with your cat via Augmented Reality and collect items for it around your community. It was started January 7th, 2018 with the goal of finishing January of 2019. It is in the beginning stages of development, with the testable Alpha completed in the beginning of March 2018.

Document detailing the background of the project including personas, pillars of the game, and a storyboard ideation process in which the design will be built around.

Through this document, the design team worked with the stakeholders and decided that these most important pillars within the game:

Document detailing the ways a user can progress through the game. This level construction is a combination of Cat introductions, toy creation, treat creation, tower creation, daily logins, and completing a level objective. Once the user completes all items within the level they will progress to the next level and be introduced to new cats, items, and other incentives in order for them to build a lasting relationship with their cat.

Document detailing the requirements for each cat to be lured to the home base. This includes the cats names themselves (and short description), their level, the player level that the user must be in order to attract the cat, any toys they need, any treats they need, and the material that the tower needs to be constructed in (as well as any add-ons that need to be created). This document was essentially the “cat key” for both the Development team and the Art team to use so that they might have a better understanding of gameplay. 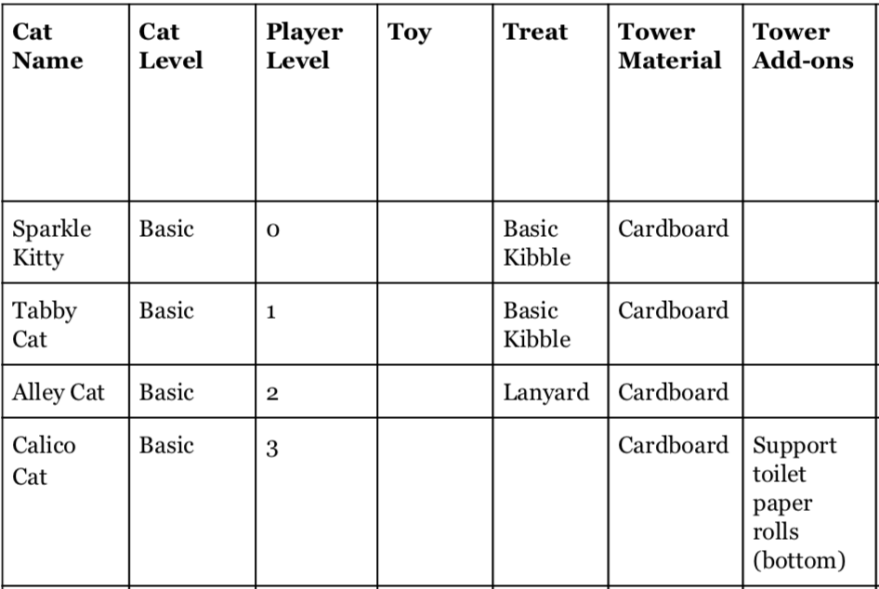 Document detailing the logical universe of the story within the game and how the user ends up with the Sparkle Kitty in their AR household. This role-playing type of document is important from the perspective of the designer but also the end-user. We wanted to think about the app in its entirety as a finished product. What will the user have to do when they log in? What is a logical on boarding process? What is the flow of introductions or navigation? These were all important questions to ask that we needed to answer.

Document detailing how each of the assets (treats, toys, and towers) will be collected and constructed within the game.

Through this document, the design team decided that the items would escalate in complexity and fun so as to challenge the user to collect items and create a sense of pride when building their new creations.

These mockups were the first ever visualization of the game. These dictated how a user will be interacting with the AR creation system in the game in relation to a basic menu. The drag and drop system is important for the creation process of toys, treats, and towers. It also integrates well with the cat interaction system itself where the user is rewarded for paying attention to the cat.

These map mockups dictate how the user will be interacting with the map collection process in the game. This interaction system is integral to the user collection of items that allow them to progress further within the game. I focused specifically on the micro interaction of bringing the stars to the center of the location spike, which allows the user to achieve a small sense of accomplishment after getting to that area.

These map mockups dictate how the user will be interacting with the map collection process in the game. This interaction system is integral to the user creation of items that allow them to progress further within the game. I focused specifically on the micro interaction of how the user actually operates within each specific area, and what interactions are appropriate for this area.

Currently the majority of the application is in the development stages of work, and I have only made slight tweaks here and there to the design for ease of development team and art team. Video example –